Fomu EVT3 is the revision that shipped for Crowd Supply backers of the Fomu EVT Board tier. This page covers how to get started, as well as what you can expect to do with the board.

Download the latest Fomu Pi Image release image and write it to an SD card. This can be done in a variety of ways. You can consult the official Raspberry Pi documentation for recommendations on how to do this.

Insert the SD card into your Raspberry Pi and apply power. The first time it runs, it will reboot several times. This is because it’s doing various setup processes such as generating SSH keys and creating the user partition.

Once the Raspberry Pi has finished, you can connect to it either via SSH or by directly logging on using a keyboard and an HDMI monitor. The default username and password are:

The Fomu EVT3 image does not contain a GUI, as it is designed to be run from the command line.

To load your first project, clone the fomu-tests repository and build it:

This will generate blink.bin. Finally, load it onto the Fomu hardware: 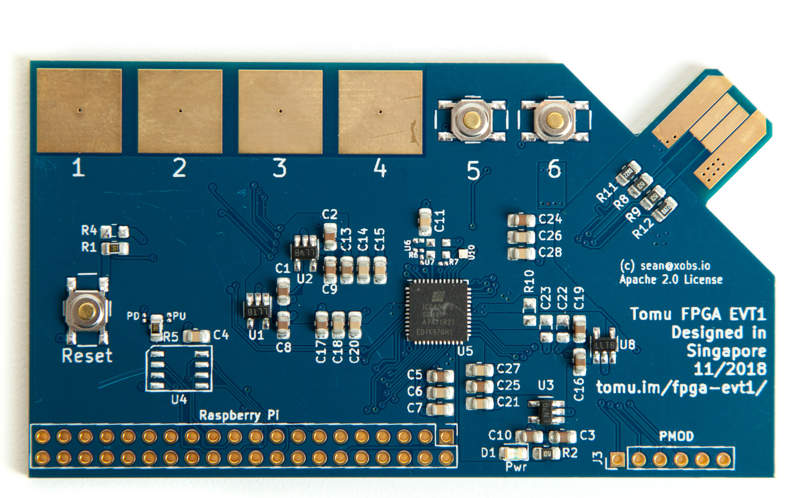 About the Fomu Raspberry Pi Image

The Fomu Raspberry Pi image has a number of design decisions that may seem unusual at first.

The root filesystem is mounted readonly

SD cards have a tendency to become corrupt when writing to them as you remove power. Unfortunately, removing power causes log messages to be generated, which are written to disk just as power is removed. Some cards can only survive a few power cycles before they become completely unusable.

However, this should only be done if you need to do something such as updating packages. In general, you should leave it mounted readonly.

/home is its own partition

This was done in order to make the home directory read-write.

There is no GUI

This build was designed to be accessed via a command line. However, a GUI can be installed using apt.

There is no Risc-V compiler

This is a known issue, and we’re working to build one for it.